The weather has been pretty darn nice lately.  Old Man Winter has taken pity on us and kept most of the cold and snow away from our area.  Saturday found me driving to RI Handspun for the monthly spin in.  I spent half my time there knitting on my Thin Ice Shawl.  I only had 2 rows until bind off, which I did when I got home.  Here's a couple pictures of it blocking on my kitchen island. If you look closely, you can see Pooh, on the right side in the second picture.  His eyes are glowing from the flash.  lol 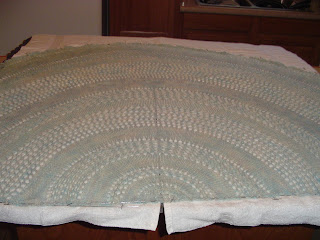 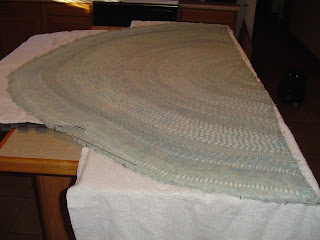 I've also been busy crocheting some Snuggle blankets for the Snuggles Project.  Sadie, of the Yarnivore Podcast, is hosting a two month knit, crochet, sew - a-long for January and February to help the animals.  So far I've finished two and started the third one tonight.  I'm hoping to get a few more done for February.  Here's a picture of one of them. 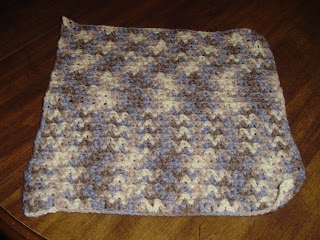 February will also see the beginning of a mitten KAL which I've signed up for.  It's two colors but it might just be the cuff in one color and the mitten in an another.  Or, it could be stranded work.  I'm sort of hoping for the latter, since I really want to do some of that type of knitting this year.
I'm still spinning my Gothic Roses fiber on my Minstrel.  I think I need to re-vamp my stash down method to incorporate the 4 ounces per month minimum rule again for this year.  I'm having trouble getting the 8 ounces spun this time.
Pooh is adapting quite well to not having Hanna around. He is starting to want more cuddles from me since she isn't here for nap time.
That's it for today.  I'm going back to my hook and try to get most of Snuggle number 3 done tonight.
at 1/30/2012 10:13:00 PM 1 comments

I saw this on my friend Donna's blog and decided to play along.

eating - yogurt and a banana earlier.  nothing right now

wanting - my yarn and fiber I dyed a couple days ago to finish drying.  It's almost there.

needing - to track my food for today

looking forward to - my knitting guild retreat in March

Progress Can Be Very Slow Sometimes...Working Down Stashes

There hasn't been much progress in my spinning or knitting lately.  The sweater has been put aside so I can work on my Thin Ice Shawl.  I'm on row 212 of 270.  They do get longer as you go, but I'm enjoying the knit.  I started the second skein around row 200 and I should have more than enough to finish it since I wound the skeins to approximately 420 yards each.  The pattern calls for 800 yards.

I finished spinning the first 4 ounce braid of the Rambouillet fiber and am ready to start the second one.  It's going to be a simple 2-ply when finished.

There was a tentative plan to go to the weaving studio this coming Thursday or Friday, but I don't think it will happen.  Pat may need my car on Thursday, and there's a snow storm coming in for Friday.  So, the looms sit and wait a bit longer. :(

I went to my knitting guild last Thursday evening and had a good time.  I taught the Tunisian Twisted Edging while a friend taught  the Magic Loop method.  Friday found me driving down to Eneri Knits for the monthly Knit & Tell she does there.  I instituted my stash rule mentioned above. I'm counting the 2 skeins of the shawl yarn as being used so I could buy 1 skein.  I came home with a beautiful peachy pink skein of 100% Cashmere and a pattern to knit with it. This will be my next project after I finish Thin Ice, some Snuggles for the animals, Dragonfly Wings Shawl, and cast on a pair of socks for travel purposes.

I've been watching some movies I picked up from the library.  The latest was the three seasons of "Ballykissangel".  I really loved the entire series and wish there was more to watch.  It was set in Ireland and there were several gorgeous sweaters, vests, and other knit items.

Firstly, Happy New Year to one and all.  I hope it's going to be a good year for everyone.

Over the last few years I've not done resolutions.  I do intentions or goals.  Here's my list geared toward 2012:

1. Continue on my "get healthier" path.  The weight is slowly coming down and I'm avoiding the back surgery so far.

2. Work on a walking regime.  Pat needs to set up my treadmill so I can use it in the basement.

3. Spin/Knit down at least one bin of each in my stash.

4. Finish knitting my old UFO/WIP sweater from 2009, which I'm making with my handspun.

5. Finish spinning the yarn for my second handspun sweater and knit it.

6. Use my handspun either in knitting, crochet, felting, or weaving instead of just looking at it.

7. Use my spindles instead of letting them decorate the shelf in the hutch of my desk.

8. Use both my looms which includes investing the time in proper lessons.

Knitting:  As I said last time, I finished my Multnomah Shawl.  Here's a picture of it blocking on my bed: 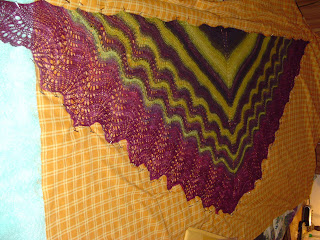 Here's a picture of the above mentioned sweater in progress.  I jokingly call this my never ending sweater.  It was finished in 2009 except for the button band and was too small and short.  After ripping out the yoke, it sat in time out for about a year.  Time was spent adding about 3 inches to the body, gussets in the arm section and to the sleeves.  Currently, I'm re-knitting the yoke.  The button band is being deleted in favor of a simple trim and frog clips instead. I only have the last decrease section of the yoke (about 20 rows) and the edging left to do. 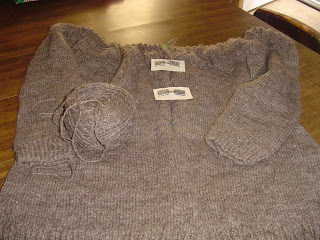 Last week I won a copy of "Thin Ice" from Diane of the Knitabulls Podcast.  I decided to dye the yarn for this as well as a couple other projects.  New Year's Day found me in my dye room downstairs.  Here's a picture of four skeins of yarn.  The natural one is for another shawl called "My Wish".  I previously dyed a gray variegated to alternate with the natural.  The pink/lilac is for a pair of socks.  The two skeins of blue/silver/white skeins are for Thin Ice.  It looks sort of greenish blue but it's really a very light blue.  The yarn took a long time to dry so casting on of the blue shawl is happening tonight. 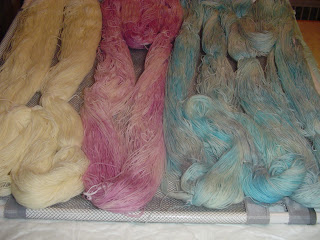 Spinning:  The Cornflower blue fiber is finished and I started a braid of pink/magenta/purple/greenish gray Rambouillet fiber I had dyed last year.  There's 8 ounces of it so it should make a nice size project. 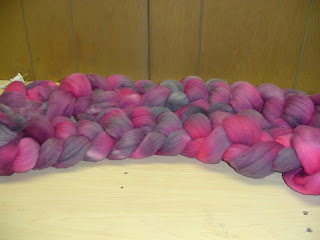 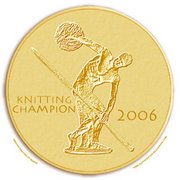 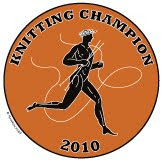